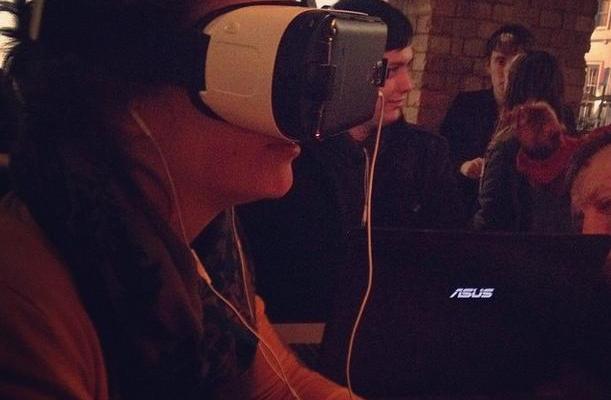 For almost 10 months I have been looking for a demo of a Virtual Reality headset. I always found out a day or a week late that there had been a demo, cursing to myself I missed it again. I felt like it was something I just HAD to experience.
And then I walked into a random pub in London while visiting a friend last week, and saw someone wearing what I thought was an Oculus Rift, the Virtual Reality glasses that kickstarted the revolution. (literally; it gained all it’s funding through kickstarter before it was bought by facebook for $2 billion.)
I enthusiastically walked up to him, barely containing my excitement, and asked if I could try it out as well.
“yeah, just after him, him, this guy, and he also asked to try it out”
Guess you really shouldn’t bring VR glasses into a bar, unless you really like the attention.

The dude just came from a game developer show and had made a VR game himself.
He used the Samsung Gear VR, a portable VR glasses where you just plug in your smartphone (currently only compatible with the galaxy note 4) download the game app of your choice and use a game controller to move.
It wasn’t the most complicated game; a scavenger hunt through a maze where you have to flip switches and try not to fall into fiery pits. 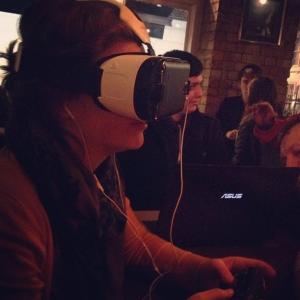 You could say it’s not such a big change from standard games. But the screen is just 1cm removed from your eyeballs, which makes it a far more immersive experience. If you look left – right, up or down, the screen also moves, and you can actually see a ceiling. You physically feel like you’re in the game. Your view point is not limited to what is on the screen, your viewpoint changes depending on where you look.
You have to experience it to really feel it, which is why i’ve been so anxious to try one out.

Our game developper was saying Steam (kind of a Netflix for games) has been developing their own glasses for almost 5 years, and he was raving about how these really take everything to the next level.
Graphics are far more stunning, you can see your own hands digitized holding the controller and your environment can be included in your virtual reality.

You can play with perspectives, paint in space and walk around the 3D figures you just made.


while 3D is already a huge step, other tools can be added for more dimensions, where more senses become tricked to be part of the virtual reality. You can be hanging, to feel like you’re flying. You can get a special treadmill that adjusts to your virtual reality when you’re walking up mountains.

With VR finally taking its great leap forward, the development of tools to accompany the Virtual Reality, to make it feel more realistic will become rampant.
The key that will make VR so successful and create such a big impact on our lives is how it will fade the borders of what is real and what is not when offering a full immersive experience.

Games is where it will start, but the possibilities of Virtual Reality far exceed this form of entertainment.

The Limit of Applications Does Not Exist

Virtual Reality can make bed-ridden people who were never able to leave their house feel like they’re climbing Macchu Picchu. Add some cold temperature in the room and wind and they could feel like they’re skiing. With some hanging devices to make you feel like you’re floating you could be swimming the Great Barrier reef.

You could be attending a festival on the other side of the globe, watching your favourite bands play, surrounded by other people that are being captured by someone livestreaming their presence. Coldplay is already working out an app to offer their concert in Virtual Reality.

Google street view will never be the same again, where you can literally stand on the street of your destination and look around you.

But watching a movie would also change drastically. The audience decides what it wants to see, and moviemakers are working on movies that offer far more action outside the vantage point of what is normally projected on the screen.

In the Netherlands they are even working on forensic applications of virtual reality. CSI The Hague are mapping crime scenes in VR to relive them as realistically possible during the investigation without having to keep the crime scene intact.

But even for intimacy, virtual reality can soothe our needs.
There’s already a bunch of tools available to help out long distance relations, but they always feel too artificial, or too far fetched.
Imagine the tools accompanying two lovers in a virtual reality dimension. 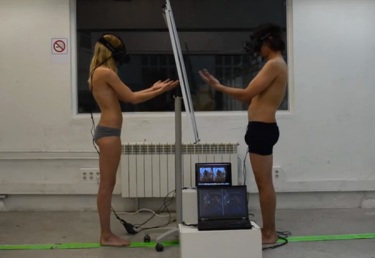 Imagine those hikikomori kids in Japan who are already locking themselves up in their own rooms for years playing videogames. Their raging lack of intimacy can now be relieved in such a way that will make some wonder why they should even try to go through the effort of actual human contact.

I’m not casting any judgement, but some of these are scenarios that cause some chills.
Just how fast would reality fade and we would be believe the Virtual Reality is real? And does it even have to seem real? What if the virtual reality is just “good enough” for some?

Not only can you be somewhere else, Virtual Reality also allows you to be someone else.

A group of journalists wants to use VR to awaken some empathy through their ‘project Syria‘ where you become a Syrian citizen, walking the streets while an air strike is going on.

Another artist is asking for someone to film their life for 30 days, eating, working, doing adventurous things, making love to his wife,… and then have it streamed to him for 30 days through virtual reality glasses. Just how fast will he accept this reality to be his own? Would he be able to distance himself from this virtual reality and keep his sense of self? Will he actually feel like he is sort of in control of what is happening? It instantly reminded me of the brilliant movie “Being John Malkovich”, where the characters find a gate to the head of actor John Malkovich and get addicted to being someone else.

As we keep pushing the boundaries of technologies, when do games cross that border of becoming part of our real lives? How far can we go in tricking our senses before we permanently damage ourselves?

Some might be able to cope with this distinction better than others. But like people who take psychedelics and cannot go back to a normal state afterwards anymore, I am sure some people will have difficulties plugging out.

Will we spiral towards a dystopian future like in the movie The Congress where people choose to stay in a virtual reality (induced by drugs) where they can be whoever they want to be in a fantasy environment of their choice?

Whether the advantages outweigh the dangers is to be seen, all I can hope is we don’t go over such life-affecting devices lightly. But one thing i’m quite sure of: Virtual Reality will happen.