And we’re OFF to South-America!!!
In an attempt to keep a travel blog I’ll try to keep updating where I am and what I’ve done in the past days. It’ll probably be quite detailed since I don’t know how to NOT be detailed, which also means it’ll be updated with a certain delay, but i’d say better than nothing, right?
so first stop: Brazil! I didn’t just take a flight to Brazil, it took me over 40 hours to get to Rio de Janeiro.
First my mother and stepdad dropped me off at the airport in Amsterdam after “waking up” at 5am (read: Nathalie was still awake.)
I then flew to New York for 9 hours sitting in the middle seat >.< (I didn’t check-in in advance so I got the crappiest seat… try to sleep like that). I was going to be in New York for 10 hours, so I thought; my first time in the US, why not set foot on its soil!
I embarked with the crazy idea to do a quick back and forth between Newark-New York in 10 hours. I met up with Sabrina, a Manhattanite whom I had met on a Belgian trainride a few months before. I had never been in awe-inspiring New York and walking around with Sabrina made it a very hectic walk around the city, so it was maybe not such a bad thing the rain drove us inside to catch up. I knew I would be back for sure.

From New York I had a night flight to São Paulo. My exhausted self was rewarded with not just a window seat, but also NO neighbor as the only lucky bastard,. I fell asleep immediately and they skipped me for dinner and even for breakfast. It took a hunger plea and some puppy eyes, but the stewardesses grumpily indulged me with a dry croissant and some orange juice. She muttered that I didn’t really deserve breakfast because I got to sleep 10h straight.

From São Paulo I still had to get to Rio de Janeiro, and it left me with another 4 hours to kill. I could have spent these in the gospel church of the airport, with Brazilian women singing hallelujah, which echoed through the airport.

We all know I just spent that time staring bewilderedly at passers-by until my flight came.

When I reached the hostel in Rio, my 3-week travel accomplice Sarah had already been there for 4 days. I was told by too many people that Brazil was dangerous and I would get robbed, raped, killed (!) so I was incredibly suspicious and cautious. When Sarah proposed to grab a bite to eat in Santa Teresa, a neigbourhood next to the hostel in Lapa, we had to walk through tiny, steep, abandoned and slightly dirty streets.

I was clutching my bag as if my life depended on it.

Sarah was talking loudly in Dutch and I kept begging her to speak more quietly because they might know we are TOURISTS!  We would get robbed, raped, killed, as I was repeatedly told! She laughed it away and went on to boast about how ‘bohemien’ the neighbourhood was and how it used to be a favela.
That was the point where I stopped and pleaded with her to PLEASE go to a bit more… touristic area. That’s when Sarah realized; hmmm, it’s Nathalie’s first day in Rio! Of course she’s not feeling safe yet in this city that everyone warned her about! So we took the bus to Ipanema beach as the sun was slowly setting at 6pm already and had dinner.

I already felt a lot more comfortable so we decided to find a bus to get back to Lapa. Sarah asking for directions in Spanish and me in Italian visibly befuddled people. This was a constant throughout the entire trip, since they could quite understand us, but noticed it wasn’t really Portuguese we were talking. We seemed like some comical duo of blonde white girls that were blurting out random sounds that had some kind of significance encrypted for the locals.
“Desculpe! não falamos Portugues!”
The next day I felt so much more at ease and far from unsafe. Rio was just like Brussels, only more beautiful, more enormous, and with mountains scattered all over the city. We went to Copacabana beach by bus with some people from the hostel.

Vendors stalked us every 2 minutes on the beach, so we had to keep an eye out on our bag all the time.

It was Sarah’s birthday and she chose to go to Jesus on the mountain as a birthdaypresent. Also known as Corcovado, or Christ the redeemer.

It gave us a really impressive view of the city, but was also quite expensive to just go up. 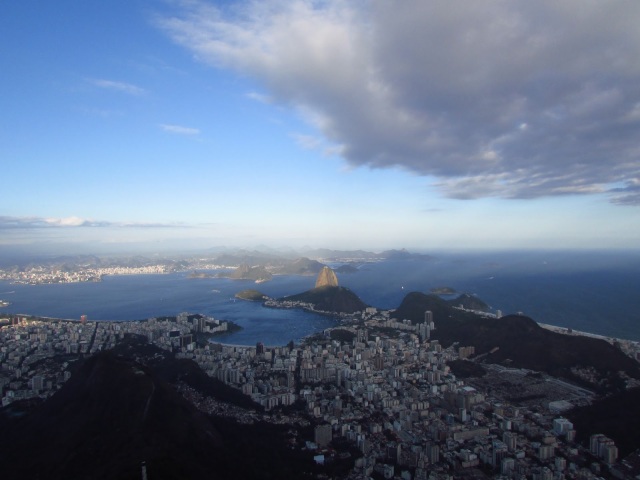 The price thing is something I’ve noticed about Rio (and was also warned about Brazil in advance); it’s really expensive. Almost European prices for everything. And that would be okay (I mean, it would still suck for us) but people make 3 times less than in Europe and pay the same price for not just touristy things. No wonder they started protesting. The busses aren’t cheap either (which actually sparked the protests) but the bus system works surprisingly good! I’ve never had to wait longer than 5 minutes for any bus and it connect a LOT of places. We’ve never had to make a transfer and could go from one place in the city to another without having to wait at all. If you don’t live in the immediate center it’s different of course, since you probably would have to take multiple busses and you pay for every transfer…
In the evening we went out. One of the hostel people had heard of a nice place to go dancing. Expecting a European-style dancing place where people don’t touch (unless they’re going all slutty) we were quite surprised when people were actually dancing DANCING. You know, the kind with moves and skills and choreography where boys swing girls around like they know what they’re doing.
Like a bunch of awkward penguins we just stood at the border of where the dancing was happening, stomping our European fists modestly in the air. Mesmerized we stared at this choreographed movements which spontaneously arose. This was no competition or class, just a night out for those kids. Girls stood at the borders, waiting, hoping to be asked to dance.
Me and Tom, a British lad, were sick of watching after a while and decided to show our interpretation of their moves on the dancefloor. Rigid, robotic, chuckling and giggling, I’m pretty sure we made all the locals cringe. But it worked somehow because the Brazilian losers in the room then picked up their guts to ask us to dance. They offered to teach us some basic moves, while trying to cop a feel. When they wanted to do more than dancing I abandoned my teachers, no chance for them to take advantage of that situation.
I took a free walking tour of the historical centre the next day while Sarah took a guided tour through the favelas. I didn’t join Sarah partially out of money-preservation but also partially because I didn’t want to feel like a disaster tourist. Going in for a sneak peak at poverty and then returning. Rocinha was however apparently one of the only favelas where the money of the tour directly went into development of the neigbourhood and most Brazilians were also supportive of it.
My ““free walker” tour was created by a few Brazilians who were so fond of the concept of free tours in the European cities that they decided to implement it in Rio too. They are entirely dependant of tips, which brings it to a professional level that makes them want to give you the best tour they have. They were very sincere and enthusiastic and I learned a lot about the colonial history of not only Rio and its ‘cariocas’ (the name they give to people from Rio) but also about Brazil itself. They showed us around the centre of the city, and some cool spots. 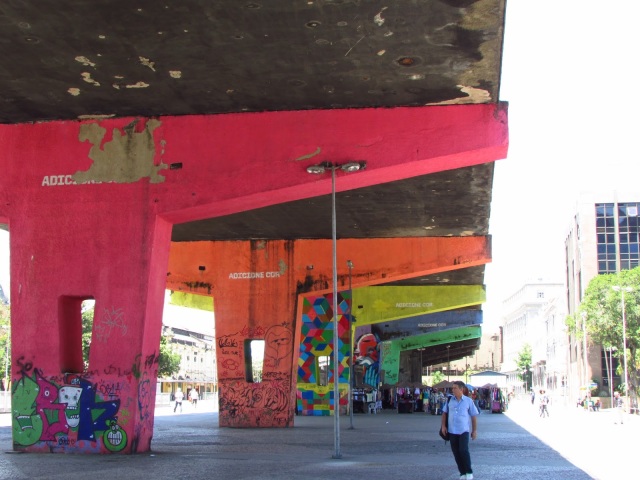 After the tour there was the possibility to have lunch together with the group, and after lunch Aline the guide even showed us some more of the city out of enthusiasm.

In an attempt to save up some money we cooked in the hostelkitchen. Since Sarah had gone to the supermarket, we ended up with a whole bunch of vegetables and roots that we both had never seen before and had no idea how to cook. But why not try something new, huh?

Most people in the hostel were going out that evening. We were supposed to go to ‘la passion’, a club with 3 floors, but apparently Henry, our American friend from the hostel, had to pay 50r$ while we only had to pay 10r$, cause we were girls. Arriving there and seeing the kind of people at the door, hearing a pumped up J-Lo blasted through the speakers, we decided to just bail. Instead we tried out the bar we had passed where slightly older cariocas were singing and dancing to some live artists and there was nothing to regret about that decision.

The next day we went to the beach again close to the sugar loaf (pão de açucar), a very steep mountain that used to be a point of orientation for the Portuguese and fishermen. I forgot that I was only wearing my havaianas slippers, and also forgot my camera so we didn’t climb the mountain. (because you know, Pics or it Didn’t Happen…) instead we stayed on the beach with heavy winds. This is when I started getting sick, feeling feverish. We still visited the botanical garden, which was basically a preserved piece of jungle in the middle of the city, very cool!

I went to bed early that day to contain the sickness…

It didn’t stop me from sightseeing though. The next day we were flying to Salvador in the afternoon, and I just HAD to see the view from the sugar loaf, so I woke up earlier to climb it. There’s a cable track going up, but we had heard from the free walking tour that there’s an easy path to climb if you know where it is. I had an amazing view again, but not a lot of time to enjoy it.

In the afternoon we flew to Salvador, the first capital of Brazil in the state of Bahia, and arrived at the airport around sunset. It was noticeable we weren’t in Rio anymore. The busses at the airport came whenever they came (we waited an hour) and the bus routes were written with a marker on the bus stop. After an excruciating hour busride, I went to sleep sick as soon as we arrived in the hostel.