After hearing so many backpackers rave about it in La Paz, me and my travel companions decided to cycle the Death Road. The death road used to be the “Most Dangerous Road In The World”. Several hundreds of people die every year falling into the ravine from the narrow road that is really not made for 2 cars passing (let alone busses). But since Bolivia created an alternative safer road in 2006, not that many people use the death road anymore, and as we noticed on our cycle, there were hardly any cars on the road that weren’t with the tourist cycle companies. It was nonetheless still quite dangerous and several tourists had accidents on it.

As I thought “hey, cycling in Brussels is no walk in the park either”, I strapped on my helmet and sat my ass down on the rented mountainbike.

We started our cycle at almost 4.500m, a mighty cold spot. It was foggy, rainy and had occasional hail that leaked quickly into our shoes, turning our feet into ice clumps.

It was so worth it though, since the first 40km were still on asphalt and really felt like skiing!
Whhhiiiiii!!!!
extremely thrilling for an adrenaline junkie like myself. All you had to do was sit on your bike, brake when you wanted to slow down and bend closer to your wheel to be more aerodynamic and go faster. We had a really fun group that wasn’t scared and it was almost like a race to the bottom, going 70km/h through the fog on the side of a highway.

After that, the real death road began and the tarmac disappeared. It was all dirt road, and a lot harder to cycle. It was a lot more tense  to be on the bike and especially in the first part I used my brakes the whole time to not lose control when going to fast. We were very unfortunate with the bad weather and had fog for almost our entire death road. Who knows, maybe that was also a good thing since you couldn’t see the 700m drop at some places right next to where we were cycling. 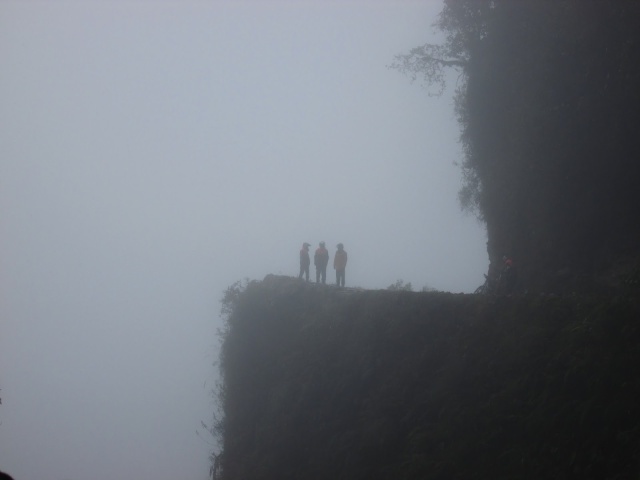 Only the last half hour we appeared under the fog and the temperatures were tropical. All our wet layers went off and we continued in shorts and tops. While I felt a lot more secure on the bike by then, I was very well aware that those were usually the moments you fall. Falling at such a point would have meant all of my skin getting peeled off by the road, so I was still cautious!!

We had lunch at the end of the road in a small town and had some beers and relaxed. When going back, our guide suggested to take the same road back instead of the alternative road. We could take our pictures of the 700m drop as well now that the fog had cleared. We happily took him up on that offer, as well as the idea to pick up some drinks for the 3h drive. In the end the drive back was almost as fun as the cycle down, and planking on the death road in our flip flops was quite memorable. 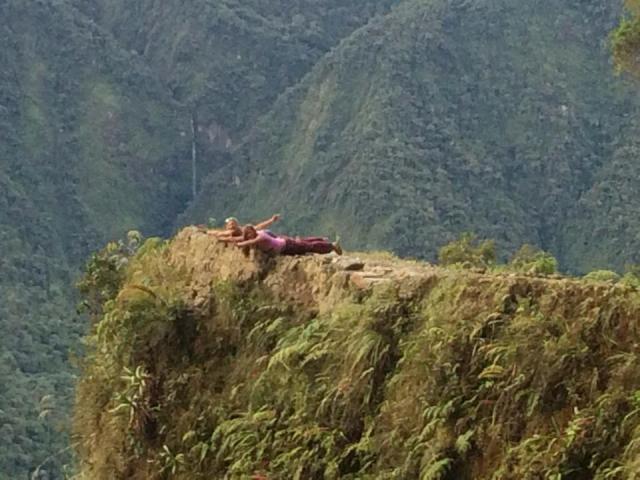