We were going to go to Morro de Sao Paulo, an island on the other side of the bay (Salvador has the biggest atlantic bay by the way!)
There were two ways to get there, a direct boat for tourists which was really expensive (but a lot shorter, only 2 hours)

or going all the way around taking a shorter boatroute, a bus and a ferry. After some discussion of time vs. money (I didn’t feel like spending more money just so we could lie on the beach a bit longer) we decided to choose adventure and take the longer route. Unfortunately we didn’t really research properly how to get there since everyone told us it’s super easy, so it took us 7 hours instead of 4 -_-
It was quite a scary trip since we were literally ‘winging it’ off the beaten path of Brazil without knowing any Portuguese.
We couldn’t find the bus we were supposed to take after the boat, and some pushy men kept telling us there is no bus. They told us we should just take their minibus, which felt a bit fishy. Without an option and anyone “helping” tried to sell us something, we went with it.

We were first alone in the minibus. After driving for 5 minutes, picking up people, the minibus was suddenly crammed. People were even standing up in what you should imagine as a built-out minivan. It was very fascinating how the transportation system worked. People were just standing on the side of the road, no real bus stops and a young helper kid would fling open the sliding door so people could hop in or out while driving.
The roads were semi-asphalted and had “natural speed bumbs” as we euphemistically called it, true Africa style.
At a certain point the mini-bus stuffed with people stopped in the middle of nowhere on the side of the road for half an hour, and everyone seemed a bit agitated. As the only non-Brazilians in the mini-bus we had no idea what was going on. when we asked our fellow passengers we could extrapolate that we were waiting until the police left, who were standing on the road a few minutes away.  We didn’t dare to ask what was wrong with our bus. Was it too full? Did their license expire? was something illegal in the van…?
There was no other option than to just stay in the bus and wait. We felt a bit safer talking to the people on the bus though, and we also then found out our mini-bus wasn’t going to our destination but to a town in between. We would have to switch busses again…  we also found out the locals paid a lot less than we did, and they were yelling at the driver that he’s an asshole for having us pay too much.
All in all we didn’t want a fuss since it was still quite cheap but it was really nice to see that the locals were sticking up for us. Switching busses in that middle of nowhere-town was also a hassle since the new bus didn’t want to leave until more people got on it, but in the end we made it to our destination. I had been quite scared on this whole route since we had been warned time and time again how dangerous Brazil is, but felt comforted by the fact that we were always surrounded by people (and certainly when there were women along).
We traveled like the locals, but we were just scammed into paying more and not having a direct route. All in all it was an experience. We learned to research our transport more properly, but also that Brazil is not that dangerous.
Morro de Sao Paulo was a beautiful island, a small paradise, but it was really touristic. it had a big resort/all-in holiday vibe. 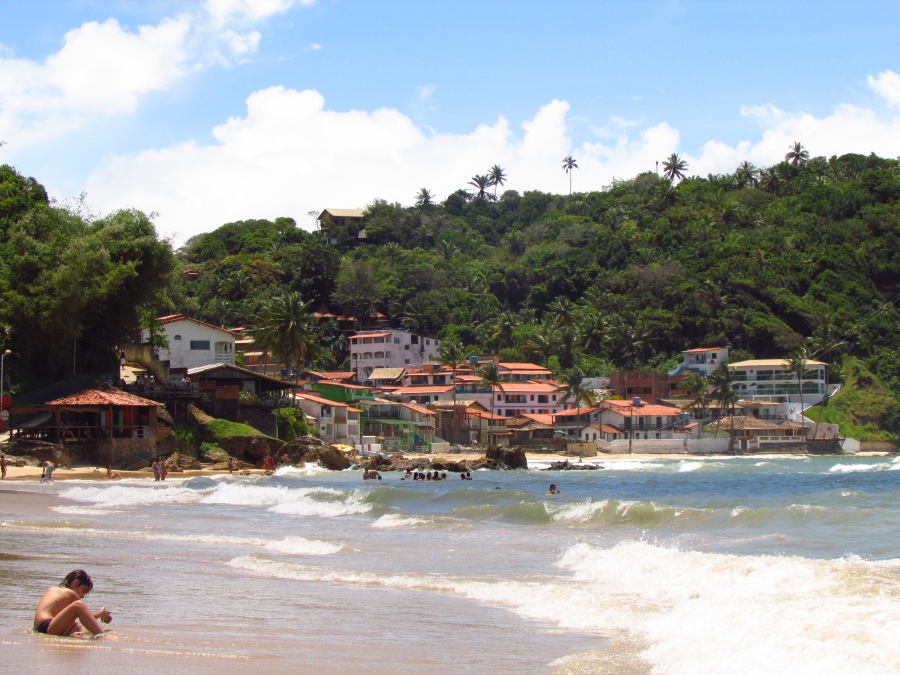 We were only there one day so we didn’t see a lot of the island, and apparently it would have been nice to cycle to the other sides of the island, but we only stayed in the tourist-town at the beach. The hostel was also deserted, we were the only ones, so after sunset at 5h30pm and after laying on the beach all day we really had nothing to do or no one to hang out with.

The next day we left for Itacaré, a surfer town a few hours away. Even though there were also tourists, the contrast with Morro de Sao Paulo was huge. This was a lovely community of chill and relax Brazilians where the foreigners just mingled along the locals. We stayed in the most beautiful hostel, the casa Verde,  that used to be a big landowner’s house. It was managed by a girl whose family had lived their for hundred year. 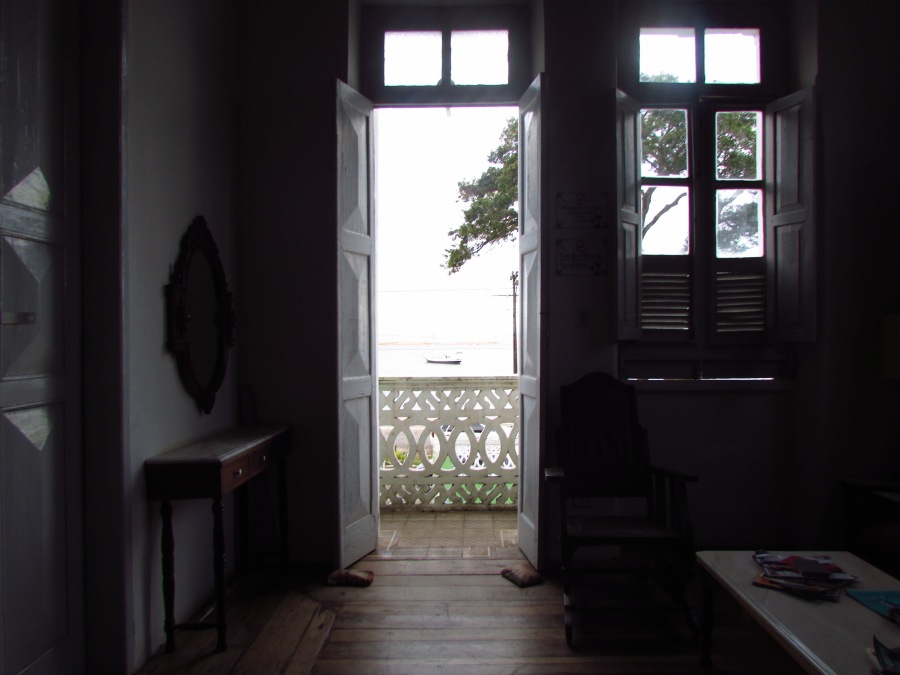 The town was apparently more crowded than usual since there was a big surfing competition going on that week. We went to a party at bananas, another hostel, recommended to us by our own hostel, in the only big street in the town. They had an amazing garden and organized jam session parties every week for the town. The hostel owner, a superfriendly British guy, said he had started organizing this weekly party a few years ago. It was difficult in the beginning to get the locals to come over, but by now it became the weekly happening for Itacaré and a nice way for the backpackers to meet the locals. Unfortunately I still don’t speak Portuguese and knew no Spanish to bluff my way into Portuguese so it was difficult for me to talk with the locals. They knew some English, but not that much. I was surprised throughout the entire trip how mono-lingual Brazil was, probably cause tourism was still not such a big happening. Some dudes offered to teach me to surf the next day, but they were quite annoying and pushy. Even though I would have liked to learn how to surf and they were offering free lessons, I already felt like it wouldn’t be “free” so I declined. I was then warned by some nice people to be careful for “gringachasers” since “blonde girls don’t last long in this town”. I still hope they didn’t mean that in a ending-up-in-a-trashbag-on-the-side-of-the-road-kinda way…

So instead of learning we just watched other people surfing for the next two days and lie on the beaches.

Itacaré’s beaches were the most beautiful I’ve ever seen, for some you even had to walk an awesome jungle path to get there

the sea was so turbulent and the waves were such fun to play in, it was awesome to be on the beach. Combined with the most chill people I’ve met, Itacaré is definitely a place I would have stayed longer if I would have been alone! 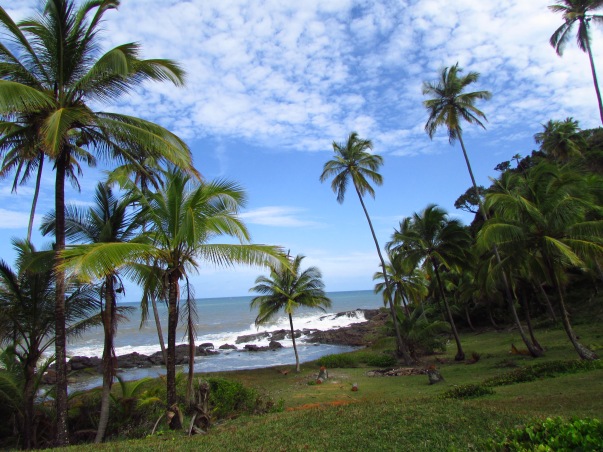 we left the next day to Lençois, a small town where everyone goes to visit the gigantic nature park “Chapada Diamantina”. the whole busride there would take us 12 hours, switching only once, but we were prepared.
when we woke up the next day however, the hour on my phone and on my watch didn’t correspond. My phone and someone else’s phone as well said it was an hour later, so if this were true we would almost miss our only bus of the day and the ensuing connection!
We assumed the daylight savings time switched to summer, so we asked the receptionist at the hostel.
He had absolutely no idea whatsoever until we explained the daylight savings time and then he understood and said, “oh yeah, that’s happening now?” He couldn’t tell us if the bus DID take that into account so we made a run for the bus.
It wasn’t there, and it wouldn’t be there for another hour, following the “normal” timing. A guy from Itacaré that we talked to the other day passed by. We asked him what’s happening. He laughed and said “yeaaaah, we don’t really care about daylight savings time here in Bahia”. The busses didn’t care either. Maybe the planes would take it into account but he wasn’t sure. Apparently the only way Bahians notice the daylight savings time, is when their TV shows suddenly switch hours.
Comforted by this explanation of the laid back mentality, we took our 12h ride without a problem.