Chapada Diamantina is one of Brazil’s largest nature park. It used to be a diamond mining area but those activities were abruptly stopped by the government in the end of the 80’s. When we were in Lençois, the largest town at the Chapada, we heard this traumatized many people for who the diamond mining business was their livelihood, which suddenly disappeared without much consultation with the communities.
Now the biggest livelihood is tourism. Almost everything happening in Lençois was done for the tourists.

Hotels and hostels, restaurants, shops, but mostly guided tours in and around the park. I would have loved for us to enter the park on our own with a compass, a topological map and my ‘expertize’ from scouts, but it was strongly discouraged to enter the 1.500km² park on our own. It was also difficult to find detailed maps, and all trailsigns for hikers had been taken away by the guides to force you to take a tour.
Sarah had also never gone hiking and wasn’t in excellent condition with her foot injuries and I didn’t feel like being responsible for both of us so we just took some of the ridiculously expensive guides through the hostel.
The first day we discovered the area around Lençois a bit by ourselves which had kiddy trails that a lot of people were walking on. Lençois is in a pit, so a big river flows to the city and it has many waterfalls around it, among which a natural waterslide that you can slide on for 20m! Unfortunately it had been very dry and the rainy season had not begun yet, so we didn’t get to see the river in its full glory.

The next day we went for a two day hike through the park. The most recommended tour was a three or four-day hike through the Paty Valley, which would apparently be the most beautiful part of the Chapada, but Valeria and Romain, an Ecuadorian girl and French guy who were going to make the hike with us only had time for a two-day hike so our disappointed guide proposed another walk. I’m quite sure I will come back one day to Chapada Diamantina and do the Paty Valley, even if what we saw now was already breathtakingly beautiful. But it’s a nice thing to look forward to do one day.
A car first took us to “the devil’s throat”, a pool with black water and a waterfall. The water is actually dark red but the deeper the pool , the darker the water gets.

We then drove up the “pao Ignacio”, one of the impressive square mountains that the Chapada is known for. The view from the mountain was amazing, and since it’s at the very beginning of the park you have an great view into the valley and on the route we were going to take.

After this little climb our walk started into the valley. It was mostly a flat surface and very easy and enjoyable walk, surrounded by impressive steep mountains.

We stopped for lunch at a tiny river where our guide, who we could call Mowgli, the jungle kid, made us lunch, and already cooked potatoes for dinner later on. After lunch it was only another 2 hours walk until we already reached our evening destination; ‘aguas claras’, some small waterfalls in the middle of the valley. With the sun setting at six already, Mowgli made us the most impressive dinner I’ve ever had when camping. Now I knew where all this money went to; he cooked for almost 2hours on a woodfire and didn’t allow anyone to help. I really felt like we were exploiting some slave, even though I know he got paid for it, but it felt really uncomfortable to me. In the morning he made fire AGAIN and made us eggs, couscous and coffee. 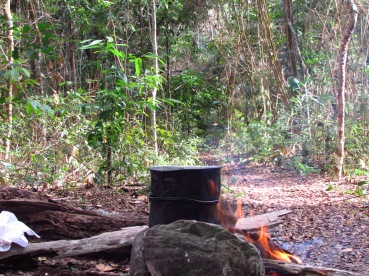 We walked back to Lençois the whole day through the valley, making a small tour of the park.

It was Sarah’s last day the next day, and even though my cheap ass didn’t want to spend any more money on expensive tours, it was too tempting to visit these caves of clearblue water that were presumably the most beautiful evarrr. The foz incantado was a beautiful underground lake in a cave, but it wasn’t really more than going, taking a picture and going back out again. 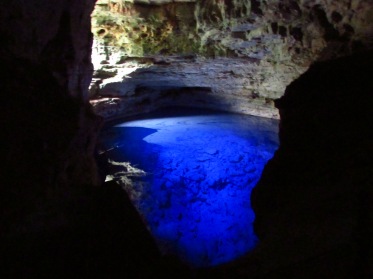 In the other cave, the foz azul, we were allowed to swim though! snorkling equipment and lifejackets were provided at the entrance, but we weren’t allowed to dive under, we had to stay on the surface. we lied in the water for almost an hour I think, it was gorgeous!

When Sarah left the next day to go back to Belgium, I felt that I wasn’t ready yet with the Chapada, and I took the bus to Capao, a small hippy community inside the park.

A girl we met a week before who had gone there as well had told us about it. With no internet or cell phone reception in the village, I was ready for some adventure. It turned out to be more populated than I thought, but my cheapest camping-room did not disappoint in giving me the feeling that I was really in the jungle. With a toad in my bathroom and no registration whatsoever at the camping I knew we weren’t in Lençois anymore.

I met some really nice Danish girls and an adorable Brazilian couple who were up to go to the Fumaça the next day, the biggest waterfall in Brazil. It was at walking distance from Capao, and even though everyone said there was no water coming out of the Fumaça, I was very glad we weren’t discouraged into going.
The view was spectacular from the top of the waterfall, which was a cliff of over 400m over which you could hang.

It was also not true that the Fumaça was dry, there just wasn’t a lot of water coming out of it. And the water that did come out was not abiding to the rules of gravity. Because if was so high up, the water streaming out just flew up and scattered everywhere, sometimes raining over us.

Even if the Fumaça is in full stream, the water never actually hits the bottom, it just vapourizes before hitting the ground.

In the evening we went to the circus of Capao. We had met some Spanish girls who came all the way to Capao to stay for a few months and learn from the circus. The place was apparently known by everyone on the island they lived on in Spain. That night there was a little performance and the whole community came out to see it. With no internet, phones or tv it was probably also the only thing to do there. The announcement of the show were made by a car that drove around with speakers to tell people the show was going to start, for lack of other means of communication.

What drew my attention was that most people in this odd community were white. A lot of them were Brazilians, or latin-americans that emigrated there (and about 30% were curious backpackers like myself) but almost no black people. This composition made me realize it were mostly privileged people that decided to live the hippy-rastafari no-luxury lifestyle; because they can, not because they are forced. All cynicism aside there was a really nice atmosphere, and the food was amazing! (what are the odds to stumble into a vegetarian/vegan community in the middle of a Brazilian national park?)
My second day in Capao was very relaxed, I chilled with the Danish girls and we just wandered around in the town, watched some Angolese Capoeira, had some açai and played some music on the camping.

I already had to leave that evening to go back to Lençois to catch my bus very early the next morning to Salvador. since I would only be in Lençois for 6 hours at night, I didn’t feel like paying for a hostel, and the people at the previous hostel I was staying at allowed me to sleep in their hammock until my bus came, a very nice gesture!

my flight in Salvador was only in the evening at 9, and I arrived ridiculously early in Salvador, since a later bus would put me in a very tight timeslot, so I preferred to have time to kill that to miss my flight to Sao Paulo. This meant that I spent 4 hours with my backpack in a shoppingmall at the bus terminal. Of which I spent 2hours watching a Brazilian children’s movie with other children sitting on one of those coloured mats. It was the best entertainment imaginable!

I arrived after midnight in Sao Paulo and since the flight had a 20 minute delay I missed the airport shuttle to the centre. I asked around if anyone was interested in sharing a taxi and I stumbled on a 10-man reggae music band that had their own mini-van going to the centre. They suggested I could join them and they’d drop me off at my destination. While I was weary to get into a car full of strangers, my senses told me these were good guys, and they behaved immaculately (even considering only 2 of them spoke a little bit of English). I never appreciated google translate’s mobile app as much as I did then.
after 30 hours on the road I arrived at Luisa’s beautiful appartment in Sao Paulo, who I hadn’t seen in almost 2 years, ready for a week in Sao Paulo.

One thought on “Brazil: Chapada Diamantina”