(This article previously appeared in Dutch on Knack – Datanews)

The tendency to curse smartphones isn’t new. But I am becoming fed up with the articles, cartoons and art that are going for the low hanging fruit of bashing new media technology.

From criticizing the display of personal life on social media and fishing for likes,

to the insensitivity of the “sharing culture” 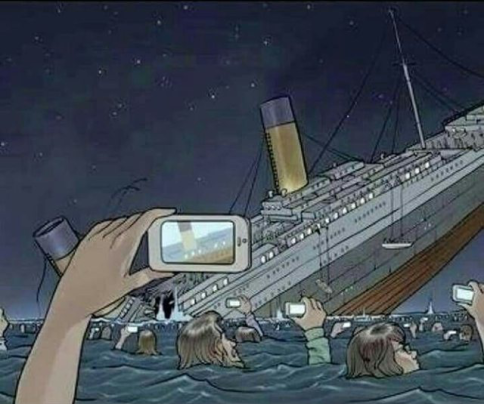 to being chained to your computer and smartphone 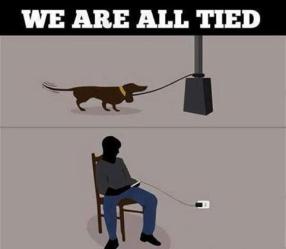 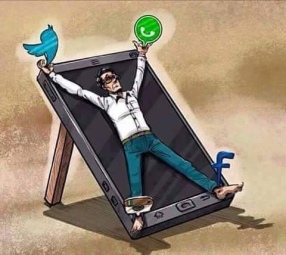 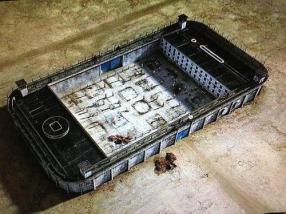 There are too many “wake up Sheeple” cries in popular culture these days, blaming hyperconnectivity to cause society to be anti-social, attention seeking and narcissistic.

I’m showing a bunch of examples in this post that I’ve been collecting for a few months, since they irk me. Like the well-intentioned, but very cringy Spoken Word artist below, who rhymes about how iPhones makes us only think of the  “I”.

Even Zenpencils, who I really respected, compares social media to a Heroin Addiction. 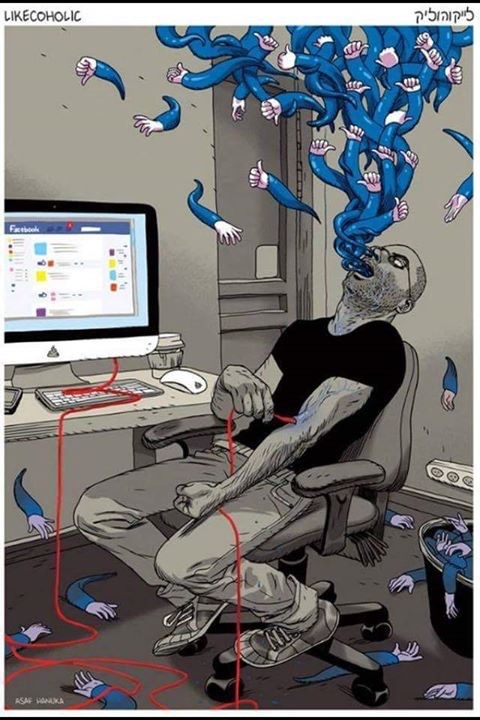 (and here’s another such comparison… not so original eh?)

But also more serious voices are riding the wave, like the TED-talk of Sherry Turkle, who is convinced that the virtual connections only make us more lonely.

The Belgian research institution iMinds even came up with a name for the “overconsumption of digital media”: Digibesitas.

It’s starting to feel like Neo-luddism, the Unabomber’s ideology against a new industrial technological society, is back in a softer form. There’s no computer stores being bombed, instead hyperbolic cries try to convince us how society is ill because we’re spending a bigger part of our social activities online.

Kranzberg’s 1st law says “Technology is neither good nor bad; nor is it neutral”. If society is sick, don’t blame technology, blame society.

“we should all throw away our smartphones maaaaaan, we’re so disconnected”

(I once heard someone say at a dinner-party, that was entirely arranged through a facebook event.)

It would be naive to argue that our social interaction hasn’t changed. Au contraire, the digital revolutions has caused quite some earthquakes, moving all our communication to the digital spectre.

As I previously wrote, our memory is even changing due to the possibility of digital storage.

But some nuance is due on the impact this digital transformation has had on our communication, since there have been plenty of positive aspects of the digital social life.

Thanks to the sharing culture, we’ve got an incredible archive of testimonies during historic occassions, like the footage during the Paris attacks, the detailed accounts of the refugee crisis, … but also on an individual level, your entire family can easily watch and re-watch the first words of a new addition to the family, or you can watch and re-watch your GoPro filmed escape from a bear that suddenly surprised you in the woods,…

And let’s not forgot movements that were mostly gained momentum through social media such as the Arab Spring or #blacklivesmatter.

Digital communication has made it possible to work from home and take care of your children or a sick family member. There are even so many more possibilities arising to keep doing the same job from the other side of the world, an evolution welcomed by the growing population of tech nomads.

People can stay in touch with friends from all over the world, you can become friends, or even become part of an entire community of people that you’ve never met before. The internet offers an inside look on other cultures for those who cannot afford an expensive airplane ticket. 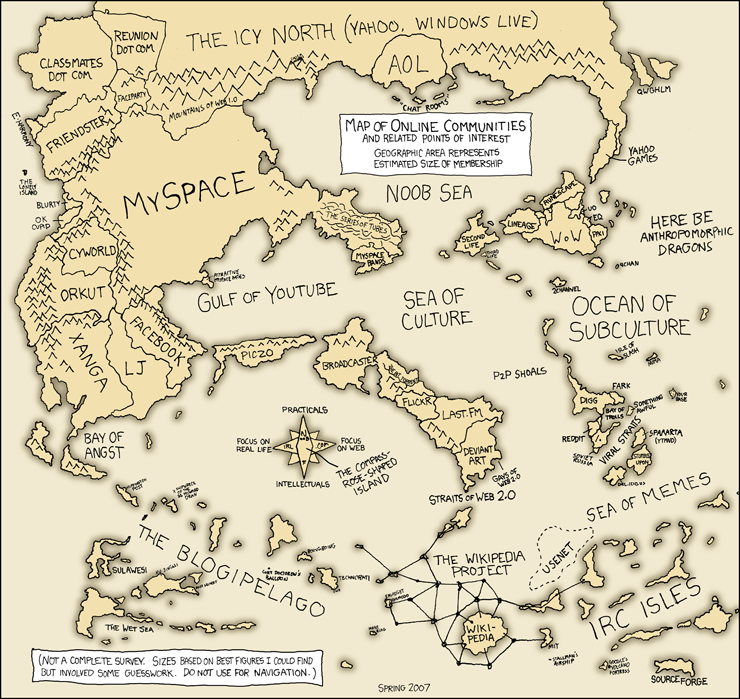 Not only has the digital life had a major positive impact on our social life, not taking it seriously can even be harmful.

As Julianne Ross wrote in Wired, the online life is just as real for many as the Physical world. Emotions people have online are just as real as the ones they have offline. Suggesting that it is not, means people aren’t taken seriously in cases of cyberbullying or sextortion.

These are very real problems, that can have an enormous impact on the human psyche.

The biggest problem with the digital society in my opinion isn’t that people are staring too much at screens, but that society hasn’t accepted yet that we are all real people online, with real feelings. Not acting like it can have real consequences (Hong Kong has even noticed a peak in suicides because of cyberbullying). Maybe the presumption that kinds are becoming more narcissistic is because they forgot that every ‘like’ comes from an actual human, and they should cherish it.

The core of my rant is this;

Technology changes, but humans are still human, in digital form.

The Digital society has only given us new tools. Tools we use royally, that facilitate and enrich our lives. We still create society ourselves. If this means we’re retrieving more into a filter bubble, it’s not the fault of the tools, but of human nature (and the algorithms a bit as well… but that’s another discussion on the human intention of the algorithms effects)

In short: yes, the digital life impacts our social interactions. But that doesn’t make them less real.